Like me, these two need to get out a bit more and experience the real thing!

For a person with small feet, mine sure are wide. I’ve never met a pair of sneakers that could confine my pinky toe for the duration of their use. 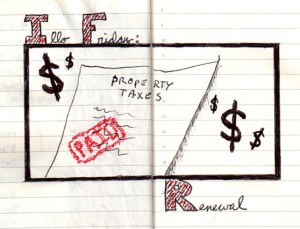 The first thing that popped into my mind—my renewed right to keep my little slice of Kenosha, WI for another year. 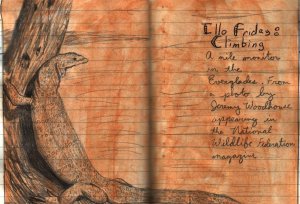 My contribution to Illustration Friday is a Nile Monitor climbing a tree stump in the Everglades. Sketched from a photo by Jeremy Woodhouse and published in the National Wildlife Federation magazine in an article about invasive species. 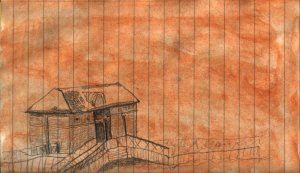 Wednesday of last week, I took a walk down to the marina. It was COLD! So what would have been a slightly larger drawing turned into a drawing of a single boathouse. I think I’m pretty much finished with winter at this point. It’s been nice, but I’m ready for spring.

Woefully behind on so many parts of my life at the moment, but ahead of the game on the parts that put bread on the table, so I can’t complain/apologize/agonize too much.

Ah doodles…who doesn’t love a good doodle session. On the train again, and you might not believe it but those two heavy black dots were a couple of puddles. It had rained that day, and the pavement was drying. The squiggly line is the border between the wet and dry pavement and there were these two puddles, you see. Speaking of seeing, the knot in a particular piece of wood ended up as an eye. Need I go on? It’s a doodle. It’s the stream of consciousness of the artist. I couldn’t tell you when they were put on paper, but I remember each moment they were put there because of the poignancy of the moment. 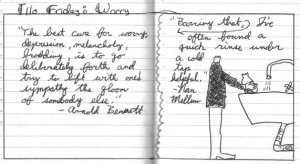 An Illo Friday gone to neglect. It seemed like the idea at the time, but is a bit macabre upon review. Still true though, just because it’s a bit dark doesn’t make it any less true. You know that moment of anxiety, when you look yourself in the mirror and have to shock yourself into a different frame of mind with the cold dash. This is that, just the nth degree.

Anyhoo, this is kind of the dregs of what has been coming out of the pencil and pen lately (not that there is a lot more), but there is something coming. Don’t get you hopes up, but it’ll be a little different. 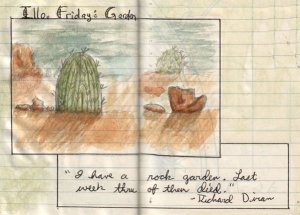 The quote: “I have a rock garden. Last week three of them died.” —Richard Diran

Don’t know about you, but “rock garden” screams desert to me. 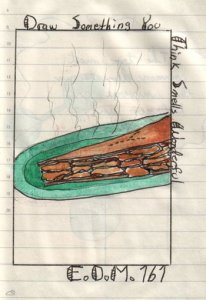 Had to fire up the super duper closer upper micro examiner thingamabob to do stupidity’s portrait. It’s not easy, I’m tellin’ ya.

Thanks for popping round!